A simple radio mixer for novice and professional users

The S0v2 is a high quality yet simple to operate radio broadcast mixer ideally suited to community radio stations, for educational purposes and for internet radio. An upgrade to the original S0 mixer, it is easy to understand, the S0v2 includes a telephone hybrid for making and recording telephone calls and a 3.5mm stereo jack for plugging in an mp3 player. The addition of a USB port allows for recording to a PC and for playing a PC automation system directly through the mixer. The headphone outputs have a built in limiter to offer hearing protection and the studio speakers mute when a microphone fader is open, with automatic mic live sign switching. The S0v2 allows presenters and DJs to be up and running quickly with a fully featured radio studio mixer.


Difference between the S0 and the S0v2:
The S0v2 has a machined luxury face plate in brushed aluminium finish and a Skype PC interface on 3.5mm jack and USB.

The Sonifex S0v2 mixer is a compact, low cost, fixed format broadcast mixing console designed for on-air radio use. It uses the same high quality circuitry and components as the Sonifex S2 and S1 mixers to provide an audio experience second to none. The S0v2 can be fitted flush into a desk-top or can be rack mounted directly using the front panel mounting holes.

The uncomplicated and intuitive front panel layout ensures that the unit appeals to novices and broadcast professionals alike, whilst a range of user configurable options allows for flexible operation.

Providing in total 4 mic, 12 stereo line, 1 TBU & 1 stereo auxiliary inputs which you can switch between.

Input source buttons at the top of each channel strip are used to select the required mono or stereo source.  The mixer has two main stereo buses, PGM (Program) and REC (Record), so each channel also has PGM and REC buttons to independently select which mixer bus the selected input is routed to.

The XLR microphone inputs on channels 1 to 4 have individually selectable +48V phantom power and a gain calibration potentiometer providing up to 65dB of gain for the pre-amp. Input channel 1 also serves as the microphone input for a dedicated talkback channel.

The stereo RCA phono line inputs on channels 1 to 8 have 10dB of gain at the input to compensate for unbalanced consumer inputs.

Input channel 9 is a TBU and stereo auxiliary input channel. The TBU allows direct connection to a telephone line and allows calls to be made and received through the mixer using the handset connection. The auxiliary channel can switch between 2 independent inputs, one on the rear panel and one on the front panel.

Any channel which has the fader up is routed to the selected output, either PGM or REC or both.

Gain for each channel is trimmed by the front panel TRIM control providing ±15dB of gain. A PAN/BAL(ance) control is available to facilitate stereo imaging.

The use of VCAs controlled by the ALPS long throw 100mm faders gives a smooth, repeatable response and ensures tight stereo tracking while eliminating mechanical and electronic noise.

USB Audio for Playback and Recording

The S0v2 has the option to send and receive audio over USB. This allows the audio on the REC bus to be sent to a PC for recording or monitoring purposes. Also, the S0v2 can receive a USB audio stream from a PC and route it to the auxiliary inputs on channel 8. Alternatively, this signal can be routed to channels 5, 6 or 7 if required.

With the concerns over listening levels being too high in headphones, the addition of an adjustable limit level potentiometer on the rear panel of the mixer is a great idea which limits the maximum level of the audio routed to the presenter and guest headphone outputs. An illuminated MUTE LED shows when a live microphone channel has muted the loudspeakers and there is a MUTE contact output available to illuminate a ‘MIC LIVE’ light via a 6.35mm stereo jack socket on the rear panel.

A three way electronically interlocking illuminated switch bank selects the source routed to the loudspeaker and headphone outputs from either PGM, REC or from an additional unbalanced stereo RCA phono input EXT 1. This external input can be used for monitoring an off air signal or studio output.

Green illuminated AUTO CUE/PFL (pre fade listen) buttons adjacent to each level control allow the automatic monitoring of any channel that has been selected to pre-fade, either to the monitors or headphones.

A pair of bright 21 segment LED meters can be configured to show either VU or PPM metering. The meters follow the selection of the presenter headphones including any pre-fade or split pre-fade function.

A separate TALKBACK button is provided to allow the presenter to talk to a guest on the guest headphones. The S0v2 uses input channel 1 as the talkback source.

The remote outputs for each channel are highly configurable providing a comprehensive range of options to interface external equipment to the mixer. Each channel input has its own START and STOP remote controls which can be triggered when the channel is routed to the PGM or REC bus and the fader is opened or closed. The remotes can be set-up to be either pulsed or continuous latched outputs, and if in pulsed mode the START button has the capability to produce repeated start pulses.

The S0v2 has a range of software configurable options which can be used to customize the operation of the mixer. It is possible to enable or disable specific inputs, enable phantom power for the microphone channels and limit which buses each channel can be routed to. Other settings control auto cancelling of PRE FADE when the channel fader is opened and all the remote output configurations.

The S0v2 has an integral universal switch mode power supply, which uses an IEC mains inlet. 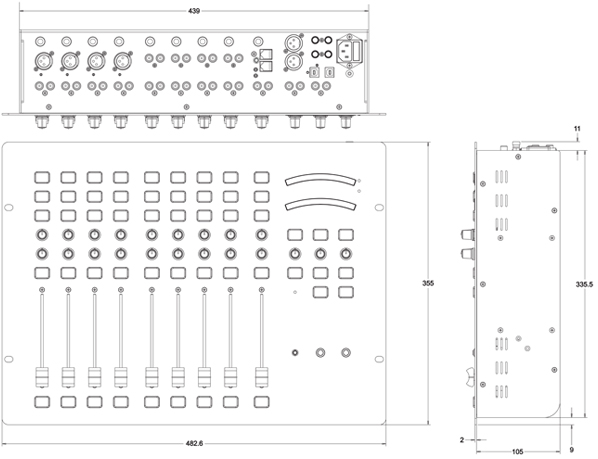 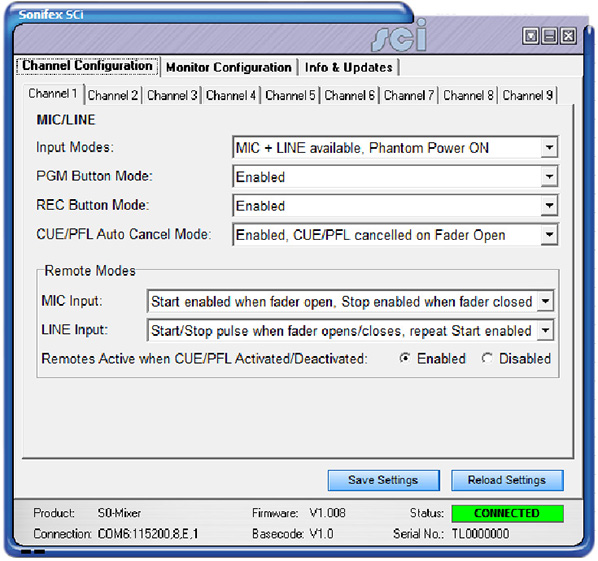 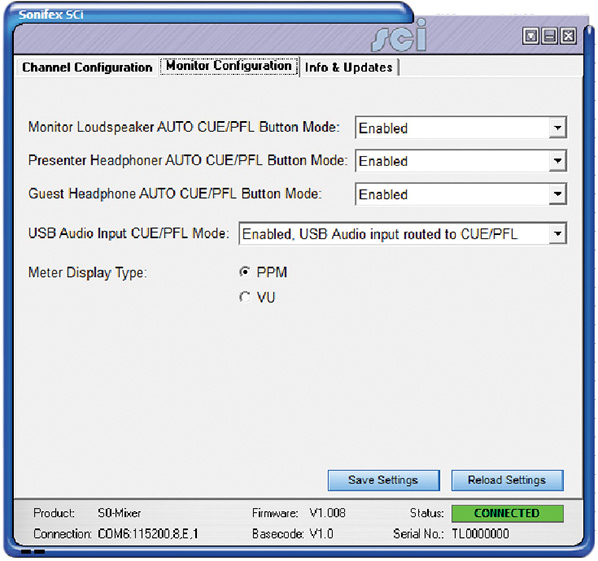 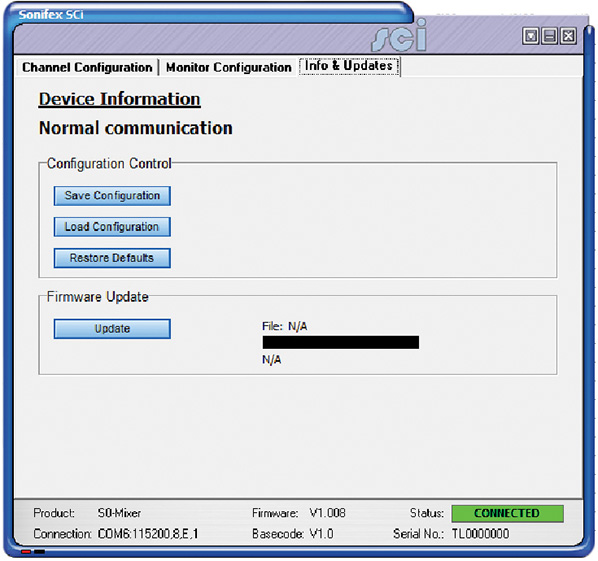