The RB-PD2 is a stereo audio profanity delay used for live broadcast programs to prevent unwanted or obscene material from being transmitted. It features an automatic audio stretch algorithm that allows between 2 and 55 (*) seconds of delay to be built up live whilst “on air”, whilst maintaining the correct pitch. The delay can also be acquired whilst playing a pre-selected audio file on a Compact Flash™ memory card. When the program is complete, the audio stretch algorithm seamlessly reduces the delay to zero.

The RB-PD2 has both balanced analogue and AES/EBU digital audio inputs and outputs on 3 pin XLR connectors and provides sample rates up to 48kHz at 24 bit. It can act as a combined A/D and D/A unit meaning that analogue inputs can be output as AES/EBU or vice-versa.

The delay can be initiated by pressing the BUILD DELAY button on the front panel. A front panel display shows the amount of delay being built-up, up to the amount initially selected.

There are several ways to make sure that any unwanted material is removed from the audio at the outputs. A COUGH function, activated from a dedicated front panel button, allows locally generated sounds being presented at the inputs, such as the presenter coughing or equipment switching noises, to be discarded.

The DUMP function, which is also activated from a front panel button, has 2 different modes. The first DUMP mode removes a section of audio that has already been buffered, by a pre-selected amount. The second DUMP mode plays a pre-selected audio file on the Compact Flash™ memory card. When the file has finished playing, the delay is then equal to the duration of the file. The DUMP button can be used multiple times to use up the built-up delay and once used, the unit automatically starts to rebuild the original delay time.

As a last resort, all the buffered audio can be discarded by pressing and holding the DUMP button which activates the DROP function.

At the end of a radio show when you want to broadcast live, the delay can be ramped down by pressing the front panel EXIT DELAY button.

A dedicated record mode allows audio presented at either the analogue or digital inputs to be recorded to a linear WAV file on a Compact Flash™ memory card. Additionally, the card format used is PC readable, allowing pre-recorded linear WAV files to be transferred easily from a PC or other such device.

A front panel blue vacuum fluorescent display with rotary controller is used for selecting the various settings of the profanity delay, which include the start delay and dump modes, safe period, source (analogue or digital), sample rate and sample bit width as well as the required delay time. The current delay value, in seconds, is permanently displayed as is the current status of the unit. Additionally, input peak digits can be selected from +12dBu, +18dBu and +24dBu for FSD and two left and right pre-set potentiometers on the rear panel allow the input gain range to be altered by ±3dB around the selected peak digits. The analogue output gain range can be altered in software from -6dBu to +24dBu output level, ref FSD. Both analogue and digital outputs can be separately muted and a front panel Bypass button disengages electro-mechanical relays to divert both analogue and digital inputs to their outputs. This is also disengaged automatically when a power-fail occurs.

The RB-PD2 features a remote port supplying 8 inputs and 6 outputs, all of which are freely assignable. The inputs can be used to trigger any of the unit’s functions such as build delay, activate cough or enter record mode and start a new recording. The outputs can provide external signalling to indicate when certain events have occurred such as the delay reaching the required value or the outputs being muted. Also, the 6 remote outputs can optionally be made to follow 6 of the inputs with the current programme delay inserted between actuation on the input and actuation on the output. This can be useful for timed events that need to account for the delay built up by the RB-PD2.

Because playback from a Compact Flash™ card can be triggered remotely, the RB-PD2 can also be used at transmitter sites to play an emergency audio file via GPI in the event of silence detection.

The front panel controls can be locked-out for situations where remote control is being used to run the unit, or where physical security is required. A red LED indicates when power to the RB-PD2 is on.
* At 32kHz 16bit 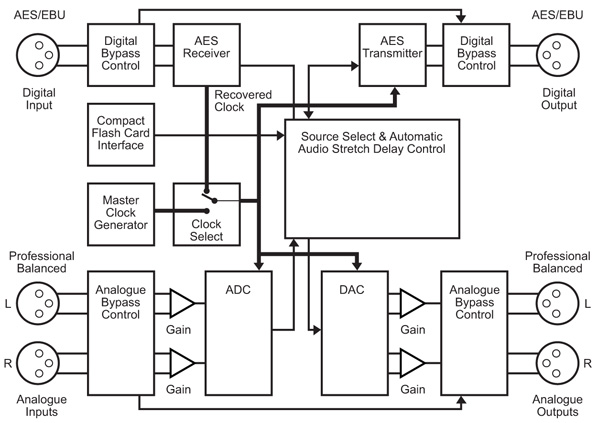