The RB-FS82 8 + 2 audio failover switcher is an important tool in many critical areas in telecommunications and broadcast chains.

The device has 8 main + 2 standby, stereo analogue audio, AES/EBU digital audio and RS232 connections (both inputs and outputs) and can be configured via Ethernet for two main operational applications:

The RB-FS82 supports any configuration of up to 8 main program signal paths (N = 8) and there are 2 standby program signal paths, in either mode of operation. Each program path simultaneously switches analogue L/R audio, AES/EBU digital audio and RS232 data. Each of these signals is wired on D-Type connectors on the rear panel.

All signal paths are passive and therefore completely transparent utilising relay based switching. This has the benefit of a “straight wire” topology during normal (alarm free) operation and also during any power outage to the device. An additional benefit of the passive signal path is AES/EBU bit transparency allowing throughput of AES/EBU AC3 Dolby E (TM) signals.

To ensure the passive nature of the device, switching is determined by alarm (General Purpose) inputs, with this alarm signalling in turn being normally provided by the encoder or decoders (or other devices) at site. Recognising the mission critical nature of the system, a high grade of relay is used in the RB-FS82.

The passive design ensures continuity of audio in the event of any power outage. However the RB-FS82 also includes dual redundant power supplies (85V-264V AC with a 12V 1A DC backup as standard). The RB-FS82-DC model accepts two DC power inputs (24 - 48V DC) via locking 2.5mm pin power connectors and both power supplies are monitored by the unit. This means that if either power supply fails, the other is ready to take over. In the extremely unlikely event that both fail, the unit’s passive signal path ensures a straight wire connection for all 8 program feeds (analogue, AES/EBU & RS232). This is essential for applications such as installation at transmitter sites, where a power failure to the unit will not prevent the audio input signal from being output to each of the supported 8 transmitters.

A row of LEDs on the front panel confirm the unit status, with each individual program path indicated as being in alarm with either Standby 1 or Standby 2 programs clearly confirmed as actively over-riding the failed signal. Alarm LEDs on the front panel are also indicated for power supply 1 failure and power supply 2 failure and these are mirrored by the device’s own General Purpose Outputs so facilitating easy interfacing of the device with the addition of a summary alarm status GPO.

By monitoring and acting on active low GPI Alarms for each signal path the unit can switch each main path between: Through, Standby 1, Standby 2 or Silence. The unit will always attempt to route a Standby path when a Main path alarm is detected and if both Standby paths are already in use, then one of the two remaining options (Through, Silence) will be used. The unit can be configured to either Automatically restore a Main ‘through’ path or wait for a Manual button press.

In the event of alarm clearing, the unit will automatically revert to normal operation, but a manual reversion mode is also provided, allowing for engineering investigation without the unit ‘hunting’ between different signal paths. Two buttons on the front panel, RESTORE 1 and RESTORE 2, allow manual restoration of the previously failed signal paths, away from Standby 1 and Standby 2 respectively.

To facilitate integration with site management systems the RB-FS82 supports SNMP V1 and is configured by a simple web based GUI. All relevant information regarding input/output status, alarms and power supplies is available via SNMP GET requests to the unit. Traps can also be generated for most of the actions which can occur, including power supply fail and input GPI alarms, etc.

Contact Sonifex for further information if you have a particular requirement that isn’t catered for by the RB-FS82 as standard.

Typical Applications:
As a failover switcher for multi channel audio transport over E1 or IP, typically as performed by APT Oslo, Prodys Nureus, where a N+1 topology is adopted. 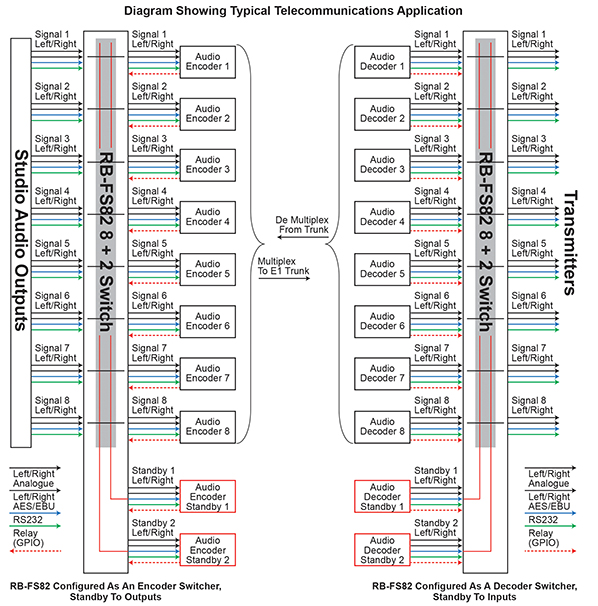