The RB-DA6 is a 1U rack-mount high performance 6 way stereo distribution amplifier for splitting a source into a number of different outputs.

The RB-DA6 has 1 stereo input and 6 stereo outputs. It can also be configured so that 1 mono input can be distributed to 12 outputs by use of a switch which is recessed on the front panel to prevent it being accidentally knocked.

The XLR-3 inputs and outputs are electronically balanced and can be wired unbalanced. Each output is individually buffered so that a short circuit on one output won’t affect the others.The left and right input gain controls (normalising) are pre-set potentiometers accessible through the front panel.

The output gain may be varied from -8dB to 18dB which is useful for normalising consumer and professional signals to give outputs of -15dBu and 0dBu respectively. 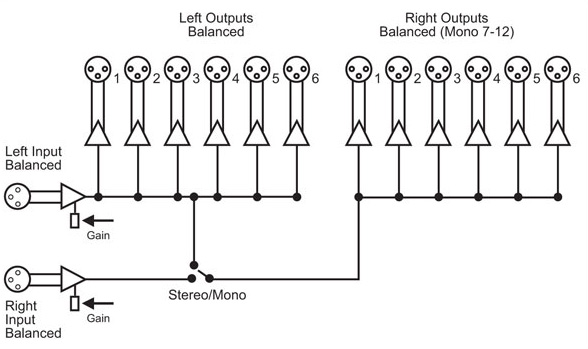