Sonifex Commentary Ahead of the Game at Badminton World Cup 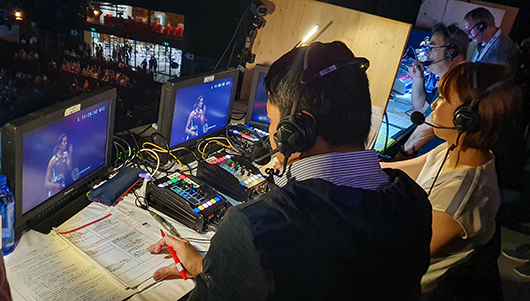 Schawa TV helped produce the event for leading Japanese TV station, TV Asahi, which brought its own staff and interpreter, but used Schawa TV equipment and knowhow to connect directly to the event network via the Dante audio-over-IP protocol. Patrick Heidorm is the Sound Engineer at Schawa TV: "The commentator systems worked flawlessly for between 12 and 14 hours a day for the whole tournament," he reports. "Theyre intuitive to use and work really well."

Heidorm's colleague, Sebastian Schmiedt was on location at the World Cup. "We helped the TV Asahi technicians set up, connect, and operate the units during the tournament broadcast, explains Heidorm. Connecting to the network was simple, and the units are easy to integrate and configure. You don't have to pull a lot of cables to use these units - just one network cable is enough to connect any number of them."

The AVN-CU2 has redundant DANTE connections for up to 16 channels of networked audio, assigned via Dante Controller, as well as two four-wire RJ45 connections for analogue or digital connection to legacy systems. It has two mic/line inputs and two stereo headphone outputs, two sets of On-Air, Cough, and Page buttons along with four talkback buttons, a programmable user button, and six rotary encoders with access to four pages of assignable volume and pan control, and colour-coded metering. Underneath the user interface is a powerful mix engine with programmable cross points and completely flexible I/O routing. Configuration of the unit is straightforward, via its web server-based control software.

Heidorn notes that the broadcast itself was also a triumph: "The Sonifex Dante commentator units are still relatively new, but we were convinced right from the beginning. And it helps that the price performance ratio is favourable too."